Symptoms of Enlarged Prostate You Need To Know

Do you suffer from the symptoms of enlarged prostate?

BPH symptoms range from mild to extreme, where mild ones have only a minimal impact on your life while extreme ones will dominate your day and night with major discomfort and pain.

Even if you think you don't have a problem now, it could be building if you are not following good prostate habits and good health habits in general. The earlier you can adopt healthy prostate habits, the much greater the chances of avoiding conditions later on.

The troubling thing is that prostate problems are happening to more and more men and at an earlier age than before. Men in their 40s and 50s are now demonstrating prostate problems, and this was very rare a generation ago.

So why do doctors tell their patients, “There was nothing you could have done to prevent this”? It may be because doctors don't want to give people the idea that, ultimately, they have the ability to control their own health. Perhaps even more often, doctors don’t believe that people can control their health.

The medical industry creates the dependency — of us on them — by implying that disease is random, spontaneous, and that the medical authorities have control over health, disease, and treatment.

Well, dear reader, look into the mirror. You are the one responsible, and you can be the one who changes course to healing and prevention.

BPH is a non-cancerous growth of the prostate gland. This now bigger prostate squeezes the urethra pee tube that it surrounds, causing a whole range of symptoms from very mild to extreme. As the prostate grows larger, it presses against the urethra like a clamp on a garden hose.

The bladder wall becomes thicker and irritated. The bladder begins to contract more often even when it contains small amounts of urine, causing more frequent urination. As the prostate grows, it applies more pressure to the urethra. Eventually, the bladder weakens and loses the ability to empty itself, and so begins a whole range of uncomfortable to painful symptoms.

It is possible to have prostate enlargement and prostate cancer at the same time, but having BPH does not increase your chances of developing prostate cancer. It is very rare to have both conditions. 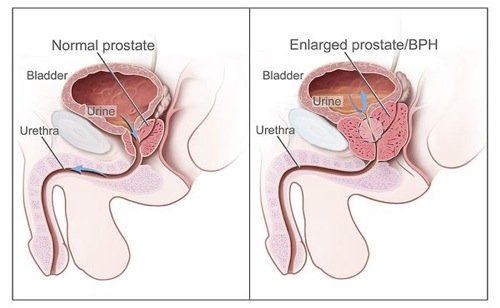 East vs. West on Symptoms of Enlarged Prostate

Remember that I said at the beginning that "Most Western men will eventually suffer from the symptoms of an enlarged prostate." But this is not true for Eastern men.

Doctors say that prostate disease is the natural course of things as a man ages. In fact, doctors go so far as to say that aging is the cause! But that observation is not as causal as they claim. Correlation is not causation!

For example, there is a remote northern Japanese island called Okinawa. The Okinawans are known for their healthy aging and longevity. The men live active lives right to a very old age... and do not suffer prostate ailments.

This is similar to many other Asian enclaves not touched by our Western modern lifestyles. A Western male is 30 to 50 times more likely of getting clinical prostate cancer than an Asian, Indian or African man. An American fares even worse, especially Black Americans.

Worse, prostate diseases now happen to younger and younger men. It is not just an old man's disease anymore. We all know people who are having some kind of prostate problem. We need to examine more closely what happens to men as they get older.

The Okinawans prove that old age does not cause prostate diseases. It is what we do over the course of our lives that causes our health problems.

These mild urinary symptoms of an enlarged prostate can include any or all of the following:

Other than urinary symptoms, there are also sexual symptoms that can be expected:

As these mild symptoms of enlarged prostate slowly worsen with time, some more pronounced or extreme BPH symptoms result from time to time.

Sad is how you feel at best!

No man wants the feeling of:

Most Western men will experience an ever-enlarging prostate. How will you know when it’s happening to you? Your peeing will show you. Difficulties ensue as the prostate starts to grow and presses up against the bladder. The enlarged prostate starts to squeeze the urethra, eventually restricting the flow out from the bladder.

This decreases your ability to empty the bladder. Retained urine makes an environment ripe for bacterial growth and infection. Urine can back up into the kidneys further spreading infection. More severely, the infection can spread into the blood. A complete inability to release urine is known as acute urinary retention, which is life threatening and extremely painful.

Another symptom of prostate disease is the decline in sperm count. Toxins are entering our sperm and cannot be removed fast enough by our ailing prostates. Sperm count has dropped about 50% over the past 50 years.

So what happens from the perspective of a man with an enlarged prostate? In layman's terms, here are some prostate problem signs...

Men with partial blockages will find that certain environments or activities inhibit the urethra or bladder from relaxing and releasing pee, such as cold temperatures or a long period of not moving. Taxi drivers and truck drivers are examples of professions with higher risk of enlarged prostates. Add office workers to the list! Sometimes the opposite can happen — the cold temperature makes you go pee even more often.

Some men will not know they have an enlarged prostate because they are unaware of these symptoms. Then it comes as a surprise when they have an examination by a doctor.

Some men will not experience any enlarged prostate symptoms at all ... until they suddenly find it hard or impossible to go pee. This condition, called acute urinary retention, can be triggered by taking over-the-counter medicines for colds and allergies, excessive drinking, cold temperatures, or prolonged periods of sitting.

Know these symptoms of an enlarged prostate so you can prevent them from happening or cure them if you find yourself suffering from some of these life changing conditions.

Welcome to the world of men's prostate problems!

Each man will experience their BPH symptoms of an enlarged prostate differently. We all have our own unique combination of symptoms. It is important to recognize symptoms early and to start changes to prevent the symptoms from worsening, heal your body, and reverse the damage. Ignore all the fear mongering around the prostate.

The message is clear — your health is your wealth — and prostate health is the key to your functioning as a vital man who is able to have a full life and a great sex life into old age.

There is a lot to learn, particularly about diets, because most so-called "healthy" diets may still lead to diseased prostate conditions. In fact, that is exactly what happened to me!

In the meantime do the following:

It is crucial for men to become informed about symptoms of an enlarged prostate so that they can take preventative actions earlier on.

It is also important to have regular prostate checkups with your doctor, including a digital rectal exam and urinary flow tests.

For more information on improving your health and reducing the risk of prostate problems with diet, you'll find massive amounts of research, information and links in my book Healthy Prostate: The Extensive Guide to Prevent and Heal Prostate Problems.

Go to Causes of an Enlarged Prostate

Go from Symptoms of an Enlarged Prostate to Prostate Gland Functions

Go from Symptoms of an Enlarged Prostate to Men's Prostate Health

All contents COPYRIGHT © 2018 by NaturalProstate.com.