Prostate testing has many pros and cons to consider because some tests may be harmful and some results may be misleading.

We have already outlined a wide variety of tests and exams that you may undergo while attempting to heal your prostate problems. I have provided a very detailed look, with specifics, at everything from urine tests all the way to prostate cancer tests, like the PSA blood test.

As far as prostate testing goes, the PSA blood test has more cons than pros and is surrounded by controversy. My thoughts on it are 'stay away!'

Here is why. Screening can find cancers earlier than before. But cancer surgeries do not result in a longer life expectancy than watchful waiting.

The problem is that PSA prostate testing usually leads to a prostate biopsy procedure. And that has real potential harm. A biopsy is an invasive medical test with risks.

There are many reasons why your PSA levels could be high, other than cancer. It's just not worth the risk to end up on the slippery slope of cancer treatment, when you'd live just as long without it.

Let's take a look at what scientists and researchers are saying about using PSA for prostate testing. 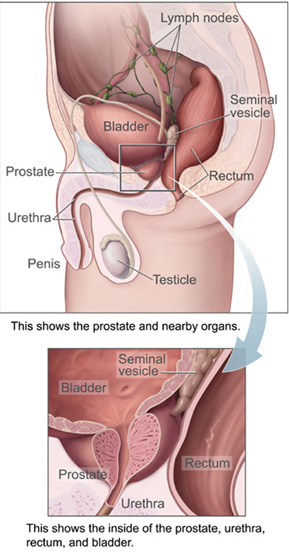 Does PSA Prostate Testing Save Lives?

The idea behind prostate testing for cancer is to increase the life span of the patient. The standard test for prostate cancer after a DRE (Digital Rectal Exam) is to take tissue samples from the prostate in a procedure called a prostate biopsy procedure, also known as a prostate needle biopsy.

Needles are inserted into the prostate in different areas to draw out samples for lab analysis. There are several real risks of the prostrate biopsy procedure...

Prostate testing biopsies do not make sense for diagnosing prostate cancer. Most prostate cancers are slow growing and show up later in life. It's so slow that most men will die of other causes before exhibiting symptoms of prostate cancer. Or another way to look at it, cancer "survivors" would have enjoyed the same lifespan with or without treatment (and with fewer complications!).

American men have a 16% lifetime chance of receiving a diagnosis of prostate cancer, but only a 3% chance of dying from it... In other words, men lucky enough to reach old age are much more likely to die with prostate cancer than to die of it.

There is also no way to tell in early stages if the cancer is “normal” or “aggressive.” Or, as Ablin put it, which of the two types of cancer—the one that will kill you or the one that won't. Jennifer Stark, research fellow at Harvard School of Public Health, led a study that was published by the British Medical Journal in 2009. It was clear from her findings that PSA tests are unreliable.

Jennifer Stark was quoted in this article as saying:

PSA cannot differentiate between indolent and lethal prostate cancer... Before PSA testing is performed, men should be... informed that the test cannot tell whether they have a life-threatening cancer.

Now look at this study!

...elevated PSA measurements are not necessarily potential signs of prostate cancer at all. Instead, they can simply be caused by a hormone normally occurring in healthy bodies.

According to a study just published in Cancer Epidemiology, Biomarkers and Prevention, the researchers discovered that parathyroid hormone, which the body produces to regulate blood levels of calcium, can raise PSA levels in healthy men who do not have prostate cancer.

Unfortunately, elevated PSA levels currently set off alarm bells in the mainline medical establishment, leading many men to be biopsied and then treated unnecessarily with surgery, chemo, radiation, and/or emasculating hormones.

An American study published in 2008 revealed that PSA screening did not reduce the death rate in men 55 and over. In other words, guys, early detection usually offers at best only minor benefits!

These days, nearly all men who receive a cancer diagnosis end up doing the conventional, symptomatic approach (surgery, radiation, microwave, hormone treatment and/or toxic drugs including chemotherapy), which attacks only the superficial symptoms.

Even worse, conventional treatments can lead to unnecessary personal harm, such as bacterial infection, relapse of symptoms, and the unintentional spreading of cancerous cells to the bloodstream or other organs and glands.

This spreading of the cancer is called metastasis. Once contained the escaped cells can now wreak havoc, leading to urgent further surgeries and radiation or chemo treatments in nearby tissues and organs.

If you haven't already had a radical prostectomy where the whole prostate gland is removed, it will happen next and other tissues outside the prostate will be affected like nodes and nerves. This is why some men will die later on from complications after having been treated for their prostate cancer.

If that isn't enough, then look at these effects:

The two most common side effects of these aggressive approaches are impotence (no sex) and incontinence (can't stop dribbling = adult diapers). Not my idea of fun unless you like going backwards in time to when you had not "dropped" or further back to diaper days without a care in the world!

To read more about why Dr. Otis W. Brawley, MD, who is the chief medical officer for the Cancer Society, opposes telling people that PSA prostate testing can save lives and why many, many more leading authorities on the subject agree, visit this page.

Look at this new study and its conclusion:

A major U.S. study of more than 76,000 men indicates that although more tumors are found with screenings, these tumors are slow-growing and unlikely to lead to death.

In the past, widespread testing has lead many men to be over-treated with surgery or radiation therapy and to suffer the side effects of such treatments, including urinary dysfunction, bowel dysfunction, and erectile dysfunction.

This study published in the Journal of the National Cancer Institute comes just months after the U.S. Preventive Services Task Force recommends ending routine PSA testing for healthy men age 50 and older because of concerns that the test often leads to invasive biopsies and aggressive treatments and does not save lives.

The reduced quality of life from cancer treatments and the fact that doing nothing has an equal outcome in terms of life expectancy suggests that other non conventional approaches may make more sense.

Want my take on prostate biopsy testing and PSA results? Get healthy! Heal your prostate naturally and avoid these terrible outcomes. It is possible. Prostate cancer can be contained and reduced by eradicating the causes.

And make prevention your new watchword. Make your prostate gland as vital as you can by stopping the harmful inputs that I outline in my book, Healthy Prostate: The Extensive Guide To Prevent and Heal Prostate Problems Including Prostate Cancer, BPH Enlarged Prostate and Prostatitis, cleanse your body, and feed it real nourishing foods and prostate-beneficial zinc-rich foods like oysters, herring, Brazil nuts and Grade B or C maple syrup, and more...

Go to Causes of Prostate Diseases

Correlation Gleason Scores and Pi-Rad
What degree of correlation (%) is there between: (1). Gleason scores 1-10 resulting from prostate biopsies (and) …

Correlation PSA increase to Benign vs Malignant size increase
An urologist just advised me the following..... BPH increase should be 'proportional' to increase in PSA values. However, high PSA values unaccompanied …

3T MRI clear, biopsy next step.
My partner has just had a 3T MRI scan with diffusion weighting and the results show nothing unusual. His prostate is 70cc which explains his symptoms and …

Hard node on prostate
Hi I have been having issues with my prostate and have been dealing with this for a year. I had the typical burning had to go pee waking up to pee at night …